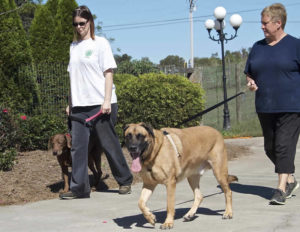 One of my favorite films ever is a film called ‘The Edge’ starring Sir Anthony Hopkins and Alec Baldwin; it’s a 1997 survival story in which the two main characters are being chased by a bear in the wilderness.

If you have seen the movie, you will know that Sir Anthony Hopkins has a much used phrase that forms the backdrop of their very survival.

He wants to try and kill the bear, and when Alec Baldwins character doubts that he can do so, asking how a mere man can hope to take on a giant Kodiak with a thirst for man blood, Hopkins points to a picture of a young man killing a bear on his matchbox, and insists to his companion “What one man can do, another can do”.

I love that phrase. I use it every day, and more importantly, I believe it.

Every day, I meet with people who don’t believe that their dogs can ever be socialized with other dogs, or be around children, or walk nicely in a crowd of people, or whatever their problem is….they cannot visualize that their dogs can break the patterns of behavior that have imprisoned them for so long.

So I have to let them first see that it can be done. Then they will believe it to be possible. Then, and only then, will they get the confidence to go with the program, having already seen a glimmer of what their dog is capable of.

On Sunday, we had the honor of working with beautiful Anatolian Shepherd dog Bandit, who presented with severe dog aggression issues.

During the home consult, I was told the depth of his problem, and as no other dogs were present in the vicinity for me to test his reaction to them, suggested that his family brought Bandit out to the Ranch on Sunday for us to see the magnitude of the issue.

Now at this point, I should tell you that Bandit, while not a 1000 pound Kodiak bear with a blood thirst, is a whopping 130 pounds and has pulled over and dragged his poor mum yards along the floor, dislocating her shoulder and damaging her neck and spine in an attempt to get at a passing dog on their street. So, he was no pussycat either….

I knew that in order to get buy in on any action plan from the family, I was going to have to prove that he was capable of rehabilitation, otherwise they would not be willing to chance another fiasco. And rightly so…..

On Sunday, after a short walk in the meadow to lessen his stress in this new environment, we introduced Bandit, through the chain link fence to Ava, our ‘trigger dog’ and undoubtedly the hardest working girl at the Ranch.

True to form, Bandit went nuts, gave off all of the signals that we would expect, teeth baring, fangs dripping, puffed up physical posturing and plenty of whipping his body around so that she could see how nimble he was…..dogs in the wild show off their prowess at being speedy all of the time. It’s a way of showing newcomers who’s fastest, strongest, built for the hunt, and my Freddie does it every single day without fail when we have a dog in that he might perceive as a challenge. Its more effective than teeth baring, more awesome to watch than any pissing contest, he just takes off running and no one can catch him. (Of course, I have to add rather quietly, that he never seems to attempt this particular show of ‘I’m the King’ when we have whippets and greyhounds in….Lol)

Throughout Bandits’ posturing, Ava stood looking bored to tears, which is what she does beautifully in situations like these, and why she works for us full time on aggression cases now. Bandits family were very well behaved and didn’t panic, didn’t murmur and just remained completely neutral as I had asked them to do. That is a big ask of anyone, and I was very proud of them.

Over the course of the next hour, Kirsten and I worked with Bandit and Ava together up on the roadway; within 5 minutes the lungeing had stopped. An hour after their arrival, Bandit was happily walking four feet away from Ava towards his family, calm and easy.

The family now had complete buy in of their dogs’ ability to change, all they had to do now was to put into practice the protocols that we use here at the Ranch….Watching a chubby, menopausal, forty nine year old eccentric Brit do it, without special collars, choking devices, cattle prods and the like, these people left the Ranch thinking, ‘Well, if she can get him to be like that, then of course we can!’ (They were all younger, smarter and  fitter than me, I have to add).

What one man can do, another can do.

It’s what inspires kids to become Olympians. It’s what compels people to climb Mount Everest. It’s what keeps us going when every single thought in our head is that we should go home, crawl into our bed and shout ‘I give up!’

I’m nothing special, just a regular person like you. I don’t possess special powers, I am not particularly strong.

It’s just that I see it, I believe it, therefore I can.

With your challenged dog, don’t give up. If I can do this, you certainly can…it just takes a change of thinking, a new attitude and a new belief in yourself and your dog.

What one man can do, another can do……what a mantra!

When we explained to a visitor that the Ranch was quiet this week by design in order to provide our staff with some rest time they commented that they thought that we referred to Freddie, Ava, Levi and Hoss as “staff” just for some FaceBook humor. So for those of our DD Members who don’t…

For the past five or six weeks, intermittently, we have been working with a dog called Oreo, a beautiful three year old GSP mix, who is one of the ‘Griffin Mud Dogs’. If you haven’t heard of these dogs, then I suggest you Google them, as you’ll get an instant life lesson in mans’ inhumanity…

I was at a friends house the other day, visiting with her and the family, and about ten minutes into my visit, one of her kids asked for a drink of water. Then the other one wanted an apple because he was hungry after soccer practice. Then they started playing and laughing, as I looked…

It’s the summertime, the busiest time of the year for anyone who boards dogs. Who on earth would be stupid enough to pick this time of year to move?? Ummmm, well….that’d be us, actually! We know the timing is crazy, we know its a huge job, and we know that there’s going to be some…