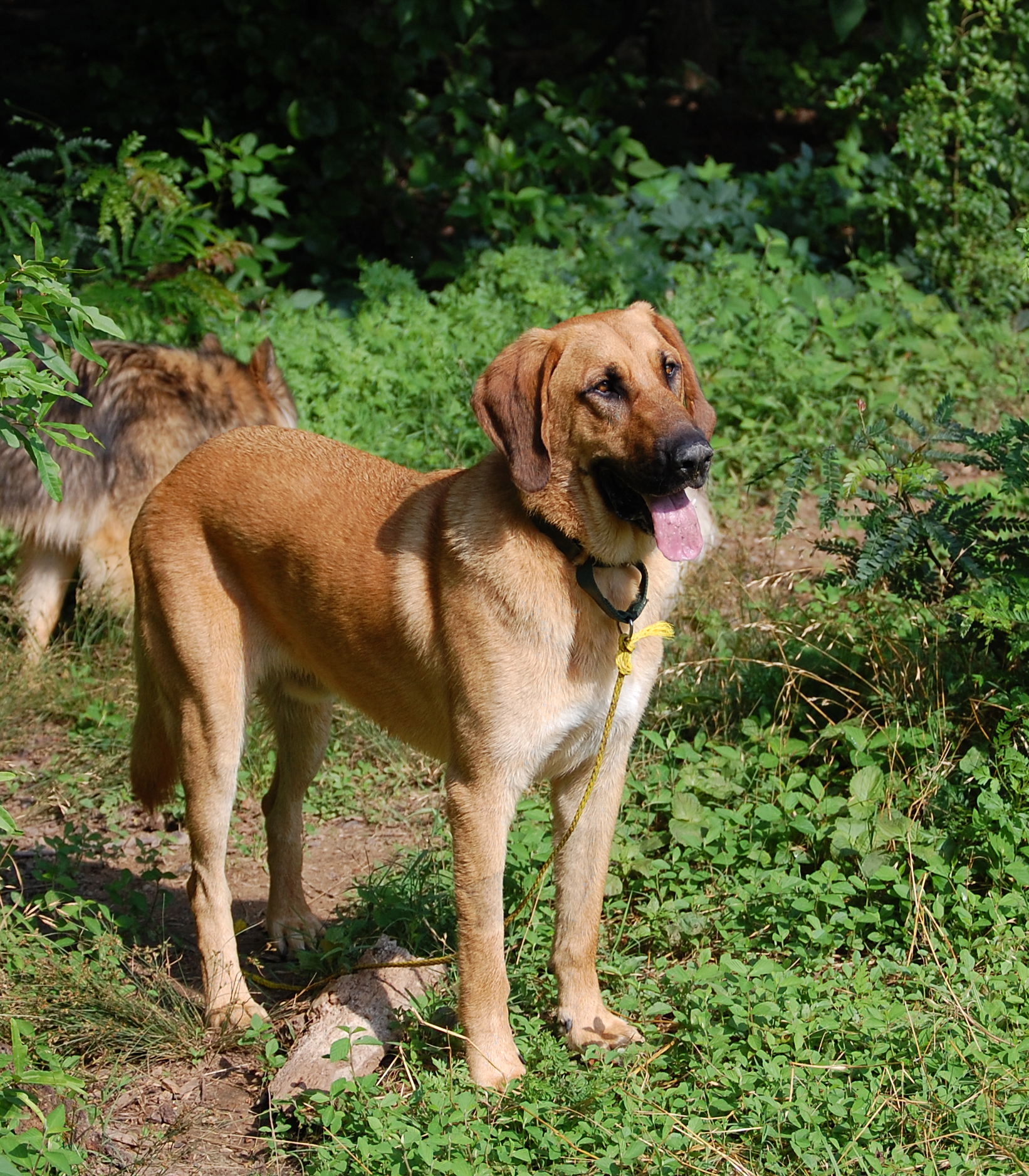 Hoss calmer for his piece of string

It’s nothing really…just a four foot piece of string tied to a dogs’ collar. What good is that going to do? How’s that going to change the world?
In the above picture, Hoss, our foster dog, has a piece of yellow string tied to his collar, I know its not very grand and certainly not befitting a gorgeous dog like Hoss, but that piece of string does a very important job.
When Hoss is playing too rough, or we need to calm him down, we tie that piece of string on his collar and he calms down within seconds. It is as if we push a magic button.
I have to be honest, it doesn’t work this way with every dog; but it does work with a dog whom you have a great relationship with, one who seriously values his freedom of movement like hunting and working breeds, a dog who is touch sensitive and one who has been leash trained.
Here at the Ranch, we use the short trailing leash to remind the dog that he isn’t completely free to make all of the decisions. We want him to remember that while he may be free to run and play, he is answerable to someone. The trailing line dragging on the floor as he runs is a symbol of his connection to us.
The feeling of the leash connecting with the ground below is hard for a sensitive dog to ignore as it sloughs around on the earth or concrete below his neck, so it acts as a signal to him to watch his behavior.
Kind of the canine equivalent of the WWJD bracelet worn by Christians all over the world to remind them as they use their dominant hand, to use it appropriately………In this case though, I want Hoss to think WWAPD? (What would Aunty Pen do…..?)
If ever Hoss, or any guest, disregards the string and continues to play inappropriately, we then go to level two and pop a leash on him in the field and have him walk beside one of us for about five minutes. It’s a simple form of time out where the dog feels the consequences of his action even moreso than if he were put up and away as he can see the play, hear it, and experience everyone else having a good time, but hes being stopped from joining in.
We sometimes have to put dogs into a real time out, but its very rare once they know the drill here, and even then, only for severe behavior that might lead to injury. In those cases, we instigate a time out inside the house for a few minutes (three max) and then lead the dog to a quieter area with different dogs of a different energy level.
I’m very well aware that these measures are akin to dealing with children and of course, that’s very much the way we deal with dogs here at the Ranch. Its all about boundaries, respect, guidance and love.
We operate on a policy here of ‘Least invasive, minimally aversive’ which basically means ‘As hands off as possible and as little unpleasantness as possible’…
No need to shock the living crap out of some poor dog for inappropriate behavior, that just seriously damages brain function.
No need to put him on his side and do the outmoded Alpha roll…that’s just basically telling the dog you can kill him if you want to, take him any time you please because you’re the big cheese…..a little over the top for your best friend, huh?
No need to smack him on the nose or the rump…..that just tells him you’re an idiot that doesn’t understand dog behavior. Dogs don’t smack each other, and they have no conception of why we do that.
The ‘time out’ in either of these forms is a really great way to check your dogs behavior…it gives him time to settle, then rethink his behavior and reboot. We want the dog to learn from his mistakes, so giving a mini time out in situ, so that he can go ahead and get a do over is a great learning opportunity.
So for Hoss, who was playing a little too physically with Gunnar yesterday, the three times that we checked his behavior by popping the leash on him, presented three opportunities………..1) to catch the behavior, 2) make the point, and 3) drive it home.
…And no animals were hurt during the making of this point!

3 Responses to “What difference can a piece of string make ?”