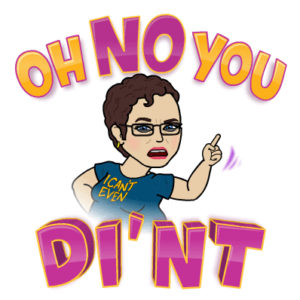 I was at a friends house the other day, visiting with her and the family, and about ten minutes into my visit, one of her kids asked for a drink of water. Then the other one wanted an apple because he was hungry after soccer practice. Then they started playing and laughing, as I looked in astonished at their behavior. I didn’t give their mother a moment to even open her mouth, I immediately shouted at them,
” What the hell are you bothering your mother for? Leave her alone ! Don’t make so much noise while you’re playing ! Play silently ! Can’t you see grown ups are talking ?”
The kids started to cry and so I shouted at them even louder, making sure I had my say before their mother responded to them. Bloody kids……..how dare they open their mouth while I’m talking? What could they possibly have to say?
Rude, cruel and ridiculous right ? You want to slap me straight in the face for saying this don’t you?
So imagine how I felt when not once, but TWICE last week, male clients dropping off dogs to come and stay with us felt it was okay to shout at dogs who were in my field barking.
The dogs were happy at being at the Ranch, excited to see all the new deliveries of just-as-excited incoming dogs, and were wagging tails furiously at the fence in anticipation. That is, until some ‘Fun Sponge’ with a misguided sense of human superiority opened their mouth and started yelling at them. I was so angry I could spit, and let both men know that right off the bat, but it did also start me thinking about how many humans think it’s okay to just bark and scream at their dogs and oh so wrongly think that that’s a valid form of communication. So I thought I’d just clear a couple of things up…..

1) Dogs don’t pay more attention to you the louder you shout, unless there is a very real panic in your voice that is based on imminent danger.

2) Dogs view anyone who has to vocalize to be heard as the equivalent of a yappy dog, one of the lower members of the pack. True leadership figures in any dog pack are always cool, calm, benevolent and wise. They lead by example and with actions.

3) If you start screaming at a barking dog, he does not understand that you wish him to be quiet, he merely thinks you’re joining in the barking, which raises his level of excitement, causing him to bark even more. Hmmm, good move, how’s that working for you ?

4) Your level of impatience with a happily barking dog tells me so much more about you than you’d be comfortable with.

The Ranch is a place of calm and peace, broken only by the occasional sound of happy barks and yips. We like it that way, we spend thousands of dollars making the Ranch the kind of place that dogs are happy in, and yes, feel comfortable enough to express themselves in, however they choose to. It’s a freedom ranch for dogs, not a military style training establishment.

When we explained to a visitor that the Ranch was quiet this week by design in order to provide our staff with some rest time they commented that they thought that we referred to Freddie, Ava, Levi and Hoss as “staff” just for some FaceBook humor. So for those of our DD Members who don’t…

For the past five or six weeks, intermittently, we have been working with a dog called Oreo, a beautiful three year old GSP mix, who is one of the ‘Griffin Mud Dogs’. If you haven’t heard of these dogs, then I suggest you Google them, as you’ll get an instant life lesson in mans’ inhumanity…

I was at a friends house the other day, visiting with her and the family, and about ten minutes into my visit, one of her kids asked for a drink of water. Then the other one wanted an apple because he was hungry after soccer practice. Then they started playing and laughing, as I looked…

It’s the summertime, the busiest time of the year for anyone who boards dogs. Who on earth would be stupid enough to pick this time of year to move?? Ummmm, well….that’d be us, actually! We know the timing is crazy, we know its a huge job, and we know that there’s going to be some…